The Sky Watcher BK1149EQ1 telescope offers an affordable price, high mobility and extensive equipment. It is the ideal model to introduce into the world of amateur astronomy and is often chosen as the first telescope. Due to the relatively short focal length, it offers a large field of view, which is an important attribute for the first observations. This makes it easy to point the telescope at an object and track it.

Optical system
Reflector telescope (Newtonian system) with an aperture of 114mm and a focal length of 900mm. Due to the moderate light intensity, the telescope allows observations of both planets and the Moon, as well as bright deep-sky objects such as star clusters and nebulae. A telescope with this aperture collects about 190 times more light than the human eye at night, providing the ability to observe objects down to almost 12th magnitude (with naked eye visibility up to 6th magnitude). The size of the mirror is also related to the optical resolution, which in this telescope allows resolving stars that are more than 1.2” apart.

Installation
The EQ1 equatorial assembly is equipped with micromovements and allows you to set the telescope according to atlas or sky map and smooth movement in the axis of right ascension and declination. The assembly should be properly set and aligned with the north sky pole, thanks to which we will be able to operate the telescope in a simple and convenient way.

The assembly can be retrofitted with a simple drive, enabling it to automatically follow the object across the sky.

Lift and glasses
The telescope is equipped with an eyepiece extractor that allows the use 1.25″ eyepieces. The set includes two eyepieces with focal lengths of 10 and 25mm, giving magnifications of 36 and 90x, and a 2x Barlow lens, with which you can get additional magnifications of 72 and 180x.

-objects on the lunar surface larger than 1-2 km;

-sunspots and their structure;

-all the planets of the solar system;

— the shield of Mars

— rings of Saturn and the largest moon Titan

-Uranus and Neptune are also within range of this telescope

— movement of asteroids against the background of stars

-about 1.8 million stars in the entire sky, with brightness down to about 12-12.5 magnitude

-double and multiple stars separated by more than 1.5″ angular.

-colors of many bright stars

-many globular clusters with clearly visible stars on the outskirts

-dozens of galaxies, the brighter ones have a visible shape

-many bright nebulae where structure is already visible 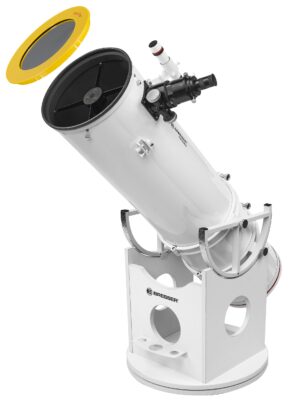 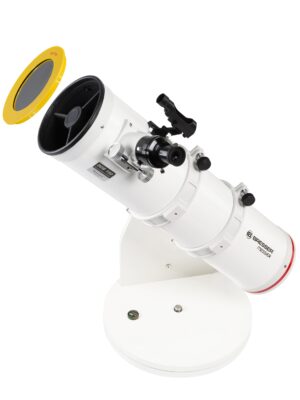